Bidens visiting Surfside condo collapse site, will meet with families of those missing

President Biden is heading to Florida Thursday as search and rescue efforts at the Champlain Towers South condo building collapse site enter their second week, with 18 confirmed dead and 145 still unaccounted for.

They then will meet with first responders and search and rescue teams before visiting the families of those still awaiting word on the status of their loved ones.

Miami-Dade Police Director Freddy Ramirez said he hopes Biden’s visit will be a morale booster for the entire community.

“We’ve had several challenges from weather, sorrow, pain. And I think that the president coming will bring some unity here for our community, support, like our governor, our mayor, all of us together,” he said, according to the Associated Press.

White House press secretary Jen Psaki said the president and first lady also want to make sure that state and local officials have the resources and support they need under an emergency declaration approved by Biden for Miami-Dade.

She emphasized Wednesday that the White House is being careful to coordinate with officials on the ground to ensure that Biden’s visit doesn’t do anything to “pull away” from the ongoing search and rescue effort. 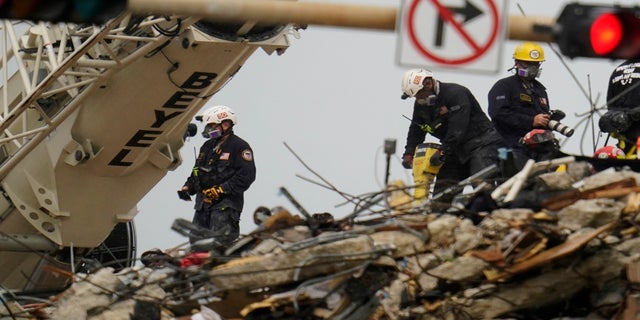 Search and rescue personnel work atop the rubble at the Champlain Towers South condo building on Wednesday. (AP)

State Fire Marshal Jimmy Patronis said he hopes to convey to Biden the need for mental health resources for rescue workers who may suffer from post-traumatic stress disorder.

“These guys are so blindly focused on the mission of saving lives, and unfortunately they see things they can’t unsee,” Patronis said.

“We want to make sure that when they ultimately do go home, that we’re giving them the strength … to be able to get back to work without fear of nightmares and challenges,” he added.

Among the remains found Wednesday were those of a mother and her two young daughters, a loss that Mayor Levine-Cava called “too great to bear.”

Miami-Dade police identified the children as 10-year-old Lucia Guara and 4-year-old Emma Guara, and their mother as 42-year-old Anaely Rodriguez. The remains of their father, Marcus Guara, 52, were pulled from the rubble Saturday and identified Monday.