The rabbi stabbed eight times outside a Jewish day school in Boston said it was a “miracle” he survived — as he recalled the broad daylight attack in a new interview.

Rabbi Shlomo Noginski — speaking through a translator to i24News in Tel Aviv— recalled the terrifying attack on Thursday outside of the school where more than 100 children were attending summer camp.

“I would like to say thank God. A miracle, a great miracle happened to me,” Noginski said. “He only managed to stab me eight times in my arm and my limbs but it could have been much worse. I feel relatively great and I thank God for the miracle.”

At first, Noginski said the suspect, Khaled Awad, 24, approached him with a gun, demanding he open his car. Figuring it was a robbery, Noginski offered his keys to his attacker, he told i24.

Rabbi Shlomo Noginski was stabbed multiple times Thursday outside a Boston synagogue, authorities said. He is recovering from his wounds.  (Dan Rodkin )

“When the terrorist approached me he threatened me with a gun and asked me to open the car,” he said. “I thought that maybe this was a robbery. But then I offered him the keys to my car. I offered him them once or twice [saying] ‘take the keys.’”

Noginski said Awad told him to get into the car, at which point he thought he was being kidnapped, and realized “this is a terror attack,” he told i24.

“I ran away from the school where there were many children,” he continued. He said the pursuit lasted about five to seven minutes before he was stabbed in a nearby park.

“This is a walking miracle that is speaking to you right now.”

Noginski told i24 that the reactions have been “warm,” and that the synagogue — which has been less crowded due to COVID-19 concerns — has seen a resurgence in attendance. 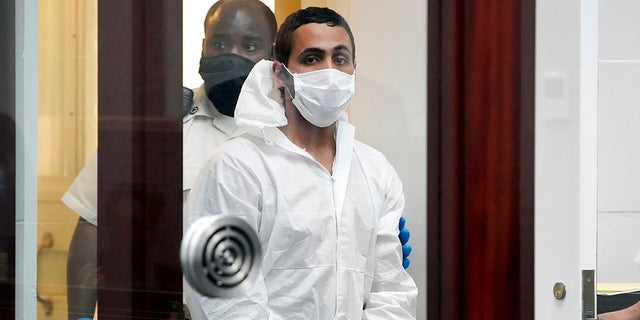 Noginski said he hopes this is a one-time isolated event.

Awad was ordered held without bail at his arraignment on Friday, the Boston Herald reported.