EXCLUSIVE: An Egyptian man who is accused of stabbing a rabbi outside of a Jewish day school in Boston on Thursday overstayed his student visa and lost his legal status on May 14, Immigration and Customs Enforcement told Fox News.

Khaled Awad, 24, allegedly approached Rabbi Shlomo Noginski with a gun and demanded his car keys, at which point Noginski ran across the street to a park, where Awad stabbed him in the arm multiple times.

He entered the United States two years ago for college, but his legal status recently lapsed.

“Khaled Awad, 24, a citizen of Egypt, entered the United States on a student visa in August 2019,” a spokesman for ICE told Fox News. “However, he failed to stay enrolled as required by law, resulting in a loss of legal status in the U.S on May 14, 2021.”

Khaled Awad is led into court while arraigned on charges in the stabbing of a rabbi near a Jewish day school, in Brighton District Court in Boston on Friday July.
((Mary Schwalm/The Boston Herald via AP, Pool))

Noginski, a father of 12 who moved to Boston from Israel to serve the city’s Russian-speaking Jewish community, was released from a local hospital on Thursday night after being treated for his injuries.

“Rabbi Shlomo Noginski is in stable condition and looking forward [to] getting better and resuming his Torah classes,” Rabbi Dan Rodkin, executive director of Shaloh House, wrote on Facebook.

Awad allegedly pointed what appeared to be a firearm at police when they located him shortly after the stabbing. Three officers then drew their guns and told him to drop his weapon, which he did.

As police were arresting him, Awad allegedly kicked one of the officers in the stomach. 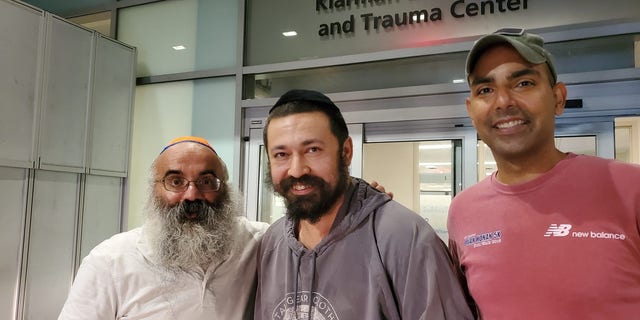 Rabbi Shlomo Noginski, middle, was released from the hospital on Thursday after being stabbed in the arm several times earlier in the day.
(Dan Rodkin)

Suffolk County District Attorney Rachael Rollins said her office has launched an investigation into the case but it has not been labeled a hate crime as of yet.

“It’s important that we recognize with respect to the Jewish community that not only globally, but locally, they are being terrorized and hate crime is on the rise,” Rollins said at a vigil in Boston’s Brighton neighborhood on Friday, according to WBUR.

One of Awad’s former friends at the University of South Florida, Eric Valiente, told CBS Boston that Awad was “violent” and “anti-Semitic.”

“He started becoming violent,” Valiente told the local news outlet. “He was very much anti-Semitic. He would say like all types of Jewish jokes. I thought he was joking at first and then I started to see seriousness in his comments.”

Aidan Anderson, a former roommate of Awad’s who is Jewish, told CBS Boston he had to move out and get a restraining order last fall when Awad attacked him in their shared kitchen.

Prosecutors said in court on Friday that Awad faced charges of battery and theft in Florida and had to be sent to a mental health facility. He had a clean record in Massachusetts.

Awad is currently being held without bail pending a hearing on July 8 to determine if he is a danger to society.

ICE lodged a detainer with the Boston Police Department on Thursday requesting custody of Awad once the criminal proceedings are done.