A Florida man has been arrested after yelling racial slurs and pointing a gun at a Black family while driving Sunday, authorities said.

Nicholas J. Gordon, 21, of DeLeon Springs, was identified as the suspect after the victims, a mother, father and two children under the age of 12, reported the incident to police, the Volusia County Sheriff’s Office said Tuesday.

The family told deputies they were driving along Spring Garden Avenue near DeLand when a four-door, yellow hatchback with four people inside pulled up next to them at an intersection and a passenger pulled out a handgun, telling them “I will kill you (N-words).”

The victims said they tried to drive away but the suspect vehicle gave chase and caught up at another intersection. The driver of the hatchback then stepped out and yelled more obscenities at them before turning around and driving away.

In their report, the family told deputies the incident was unprovoked and they had no previous interactions with the suspect vehicle or any others that would lead to a dispute.

Footage was used to track down the suspect vehicle. Deputies conducted a traffic stop and asked Gordon to step out of the vehicle.

Gordon denied having been in the area and said he had no weapons in his vehicle, deputies said. He later said he did keep a gun in his lunchbox.

Gordon also told deputies he had an idea of why he was pulled over, telling them: “I think I know what it is. It was that Black lady that brake-checked me, and then she started trying to follow me…”

He further denied involvement in the incident until detectives showed him the surveillance image of his vehicle. Gordon then confirmed he was the passenger in it.

He claimed the incident was sparked after the victims’ car backed into his vehicle and drove away, and he and his friends only chased after them to exchange information.

But deputies found no signs of visible damage to Gordon’s car and no reports had been made about an alleged crash. 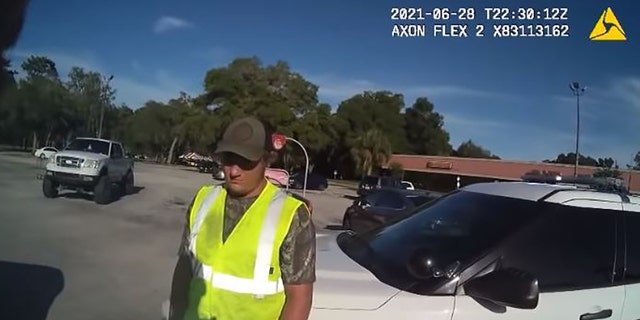 Gordon denied involvement in the incident until deputies showed him a surveillance image of his car.
(Volusia County Sheriff’s Office)

When asked why he armed himself during the incident, Gordon said it was because “he knew (the victims) were African American and he knew from past experiences African Americans can be violent,” according to an arrest report.

Detectives asked him what the victims did “other than being Black” that made him feel threatened enough to arm himself. “Nicholas advised nothing,” deputies wrote.

“At the conclusion of the investigation all evidence indicated this incident was clearly just a violent hate crime where the suspect pointed a firearm directly at the victims, a family in their car with children, who were solely targeted for being African American,” detectives wrote in the report.

Gordon was charged with two counts of aggravated assault with a firearm and child abuse. He did not have a concealed weapons permit and was additionally charged with carrying a concealed firearm.

The charges were enhanced due to the incident being classified as a hate crime.

“This type of behavior will not be tolerated in Volusia County,” Sheriff Mike Chitwood said in a written statement. “I want everyone to know this Sheriff’s Office will do everything possible to track down and arrest anyone who commits such an abhorrent act of hate in this community.”

Gordon was being held without bond Tuesday at the Volusia County Branch Jail.