As the nation’s 245th birthday approaches, not everyone is bullish on the red, white, and blue.

Almost 7 out of 10 voters (69 percent) believe America is the greatest country to reside in, according to the latest Fox News survey, down from 83 percent in 2015 and from the high-water mark recorded a decade ago: 84 percent in April 2011, the first time the question was asked on a Fox News poll.

On the other side of the ledger, 26 percent say America is not the best country to live in, up 12 points. 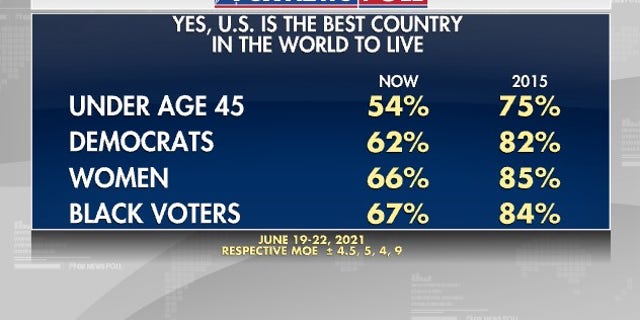 FOX NEWS POLL: HALF OF VOTERS ARE UNFAMILIAR WITH CRITICAL RACE THEORY

Meanwhile, a record-low 52 percent believes the United States still has its best days to look forward to, down from 62 percent in 2017 and a high of 63 percent in 2012.  Thirty-nine percent think the country already hit its peak, up 10 points from 2017. 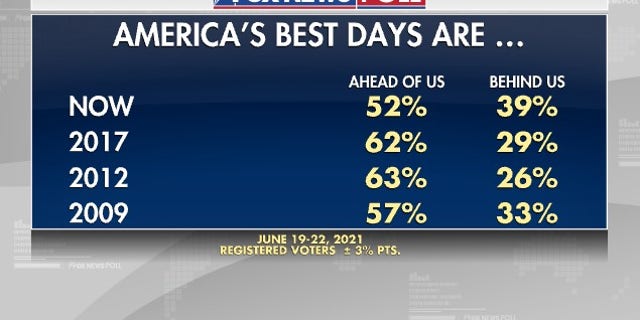 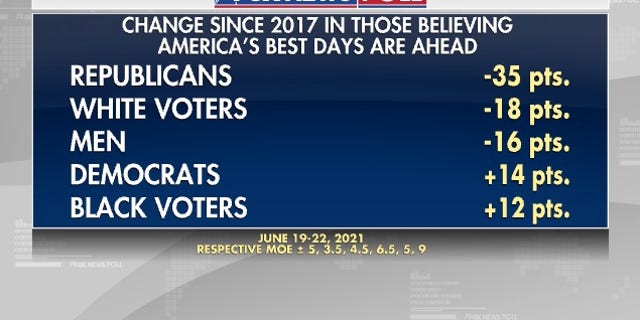 Millennials pose an interesting view: 53 percent say the U.S. is the best country in the world to live — far fewer than the 72 percent of GenXers and 79 percent of Baby Boomers who feel that way. At the same time, about half of Millennials (51 percent) believe the country’s best days lie ahead — about the same as GenXers (53 percent) and Boomers (49 percent).

Despite a less rosy outlook on the country’s future, voters overall give President Joe Biden positive ratings five months into his tenure: 56 percent approve vs. 43 percent disapprove of how he’s handling his job.

Also, approval of Congress is up 4 points since April — and 10 points since last year (34 percent approve now vs. 24 percent last June) and 7 in 10 voters feel their personal financial situation is holding steady (56 percent steady) or they are getting ahead (17 percent).

Twenty-seven percent say they are falling behind financially, an improvement from 32 percent last August.

Conducted June 19-22, 2021 under the joint direction of Beacon Research (D) and Shaw & Company (R), this Fox News Poll includes interviews with 1,001 randomly chosen registered voters nationwide who spoke with live interviewers on both landlines and cellphones.  The total sample has a margin of sampling error of plus or minus three percentage points.