The COVID-19 pandemic delayed the unveiling of Washington‘s newest monument–the Dwight D. Eisenhower Memorial. The debut was slated for May 2020, right before the year’s Fourth of July celebrations. But the memorial didn’t make its appearance until September 2020. Now, with the district returning to normal, tourists can enjoy the Capitol’s newest tribute.

It’s a memorial Chief Spokesman for the National Park Service, Mike Litterst, says is fit for the man it was built for.

“This is a memorial grand in scale, but it’s entirely befitting of a man like Eisenhower whose contributions on the world stage were so immense,” said Litterst.

Encompassing an entire city block, the sprawling memorial is flanked by two giant columns, one to honor Eisenhower’s legacy as the supreme allied commander in WWII, the other – his role as 34th president of the United States.

In between the column sits a young Eisenhower, commemorating the humble beginnings of a farm boy from Kansas.

Memorial of Dwight Eisenhower as a child

“His parents raised him in a home of discipline, of the value of religion,” said Litterst. “He learns the importance of education, of hard work. He works at the family creamery, and he will take all that off with him when he goes to West Point to embark on his life’s adventure.”

Architect Frank Gehry designed the memorial with Eisenhower, as a child, gazing across the plaza to see his future unfold. First, statues depicting Eisenhower on the eve of the D-Day invasion. 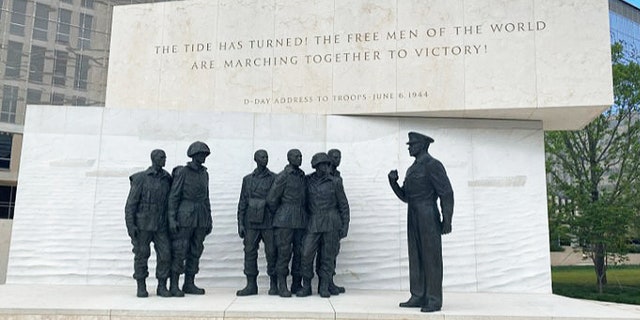 “Right before they parachute into Normandy to begin the invasion…he calls upon and tells them that they are about to embark on a great crusade and then says the tide has turned. The free men of the world are marching together to victory,” Litterst said.

Beyond the D-Day depiction is a separate tribute representing Eisenhower’s eight years as 34th President of the United States. 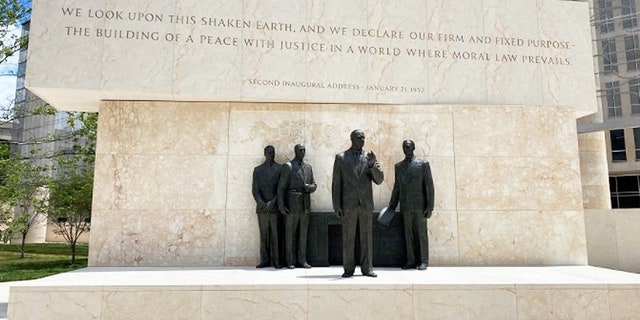 “He was a leader who really worked hard for rising generations,” Eisenhower’s granddaughter, Susan Eisenhower, reflected. “He was working for the long haul, and he had young people in mind. He wanted to leave the place better than he found it.”

But perhaps most notable is the setting behind the statues.

“The tapestry is an abstract depiction of the cliffs of Normandy, which were liberated by Eisenhower’s army on D-Day,” said Litterst. “But the depiction shows the cliffs in peacetime depicting Eisenhower’s keeping the world peace in his eight years as president.” 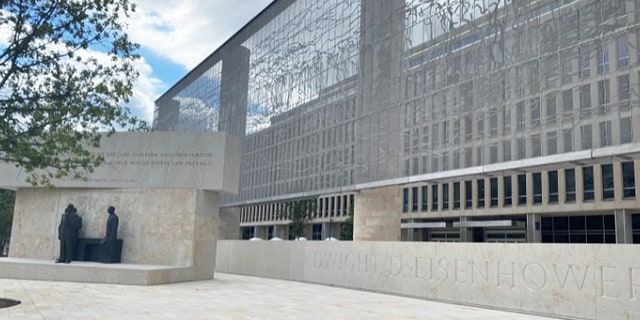 The memorial’s location also shares significance, sitting across the street from the National Air and Space Museum.

“The U.S. entry into space was a big moment in the Eisenhower administration,” Susan Eisenhower said.

Eisenhower’s granddaughter also noted the importance of the people next to her grandfather in the statues.

“Ike is with people,” said Eisenhower. “This wasn’t all just about him; it was also about the people he led and the people who advised him.”

Many of Washington, D.C.’s famed memorials were shut down at the beginning of the COVID-19 pandemic, with some sites still closed to the public.

“It’s such an honor to…know that the American people are going to celebrate the Fourth of July with a bit of Ike in their lives,” remarked Eisenhower.